‘Lo all, been a bit lazy about posting again, but with the month of Halloween to spur me on, here’s to much and more ghostly ghouls!

Mermaids also have their part among Japanese folklore, but not quite the same way they’re featured among Western audiences, with the singing and drowning sailors etc. 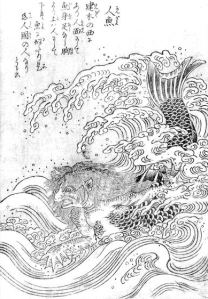 According to Japanese folklore, the mermaid or ningyo isn’t the epitome of beauty that they are frequently portrayed. Supposedly, its still half-fish, half-human, but the human half has long, reddish hair, a unibrow, a mouth like a monkey and small teeth like a fish. The ningyo has webs between her fingers and a bluish tint to her skin, but she does have a lovely voice and is said to exude a sweet perfume.

There are also stories that eating mermaid flesh will grant long life.

This concept is echoed in the Journey to the West where various creatures and demons were after Tang Sanzang because they thought eating him would grant them immortality and great power. He’s also frequently depicted as really good-looking, so there’s that too.

It’s said when she was still a child, she ate the mermaid flesh her father acquired from someone and was gifted with a thousand-year life, but she gave two hundred of it to a lord (don’t ask me how), leaving herself with eight hundred years of life. Throughout the years, she kept her youthful appearance and many years later, was elevated to a Bikuni. She wore camellias in her hat and was said to travel the world, planting camellia trees.

For those who are interested, check out a great manga mini-series by Rumiko Takahashi that centres around the Russian roulette of eating mermaid flesh.